Disney's "This Is Who I Am" with Mick

And all of his animal friends at the Good Dog Animals ranch!

This summer, our ranch was turned into a set when Disney decided to do a spot on Mick for their short series "This Is Who I Am." Owners Guin Dill and Steve Solomon were interviewed and all of our animals got a chance to make their own appearances. Each of our employees were able to take part in the filming, whether to help handle the animals, or to watch the crew as they worked. It was great to have the chance to share our ranch and Mick's story with the world and we are incredibly happy to see how well it turned out!

Dog With A Blog has added many new characters to the show for Season 3 - one of which you will be able to meet on the new episode "Stan Falls in Love" airing tonight at 7:30pm on the Disney Channel. Disney came to us at the beginning of the season and told us they wanted to add a love interest for Stan on the show. So we began our search for the perfect match! When we found Daphne, it was love at first sight for us as well as Mick. The chemistry between the characters Stan and Princess on the show is exactly what it's like between them in real life here at home. Princess won Stan's heart on the show, and she's sure to steal yours, too! 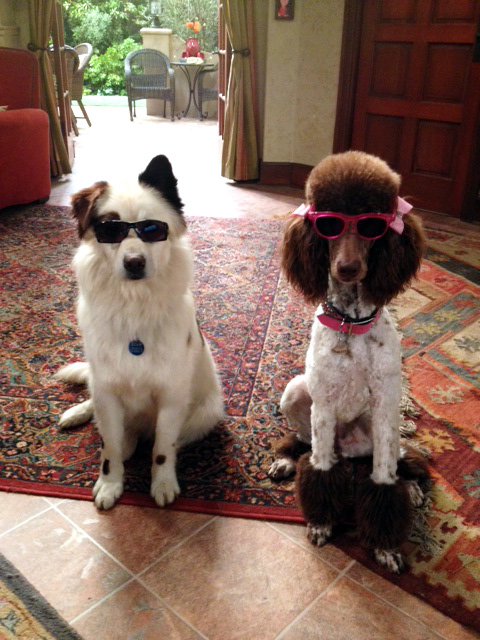 The video also introduces a few of Mick's other friends that live with him here on the ranch. This includes Beatrice who plays Stella on Modern Family, Penelope the Iguana, Blossom the Opossum, and all of his cat friends. Guin and Steve, both animal trainers, rescued Mick a few years ago. They knew he was a special dog, but they had no idea how big of a star he was going to turn out to be. They are huge advocates for rescuing animals from shelters. The majority of the animals at Good Dog Animals are rescues or animals that are being rehabilitated for release back into the wild. It is incredibly rewarding to save and live with rescued animals as you can see with our very own Mick!

We hope you enjoy taking a peek into the life of Mick, his friends, and his parents here at Good Dog Animals!